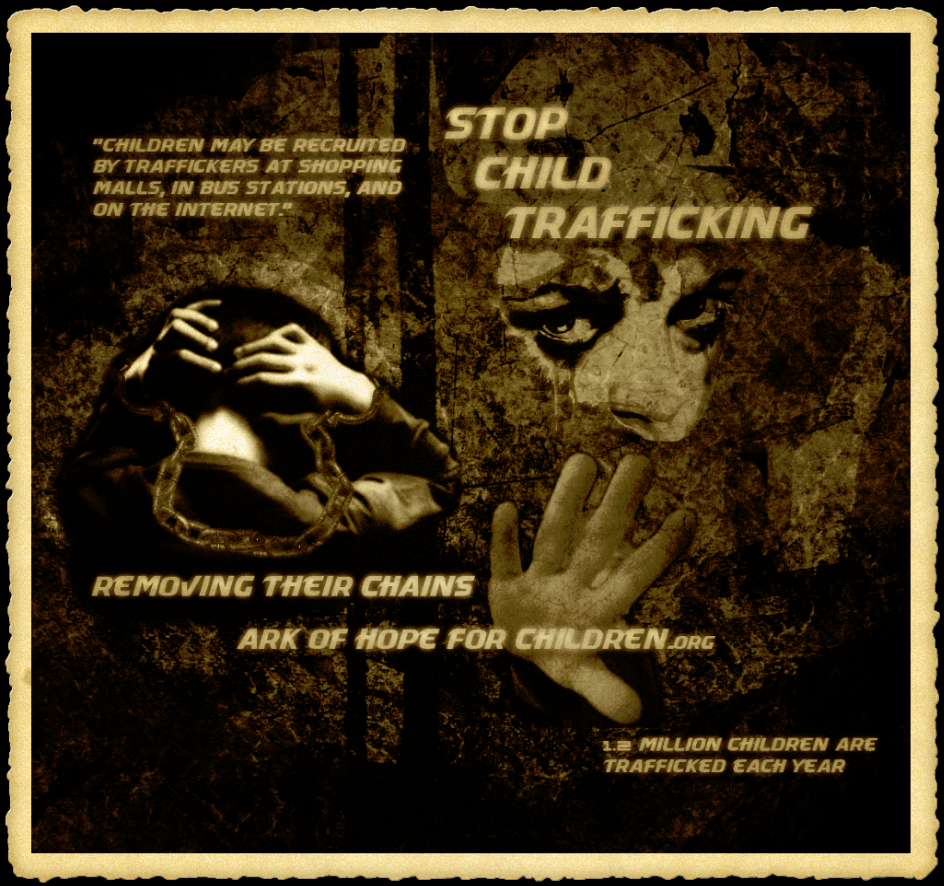 Ark of Hope for Children has compiled the following U.S. and international statistics on human trafficking, child trafficking and sex trafficking.

High Springs, FL This email address is being protected from spambots. You need JavaScript enabled to view it.

* "When a child has been recruited, transported, harbored, or received and some commercial element is introduced in the production of child pornography, then that individual has also engaged in child trafficking. Whether they work in strip clubs or sweatshops, these boys and girls are victims of human trafficking."

* The Trafficking Victims Protection Act (TVPA) defines “severe forms of trafficking in persons” as: sex trafficking in which a commercial sex act is induced by force, fraud, or coercion, or in which the person induced to perform such an act has not attained 18 years of age."

* "The economic reality is that human trafficking is driven by profits. If nobody paid for sex, sex trafficking would not exist."

Where do trafficked children come from? 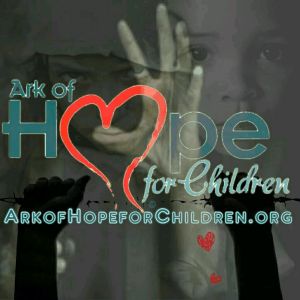 Child trafficking victims, whether for labor, sex or organ trafficking, come from all backgrounds, include both boys and girls. They span a wide age range from 1 to 18 years old. Sex trafficking victims up to roughly 25 years old most often started as young as 14. Children are trafficked out of, or into the United States from all regions of the world and represent a variety of different races, ethnic groups and religions. They may be brought to the U.S. legally or smuggled in.

Trafficked children can be lured to the U.S. through the promise of school or work and promised the opportunity to send money back to their families. Children are also vulnerable to kidnappers, pimps, and professional brokers. Some children are even sold to traffickers by their families, who may or may not have an understanding of what will happen to the child. U.S. born children are also trafficked within the U.S., coming from any racial group, socio-economic background, and come from or trafficked within both city and rural areas.

Update: In 2012 the (UNODC) United Nations Office on Drugs and Crime reports the percentage of child victims had risen in a 3 year span from 20 per cent to 27 per cent. Of every three child victims, two are girls and one is a boy.

Click to read the Needs of Rescued Trafficking Victims

According to non-governmental U.S. sources;

The largest group of at-risk children are runaway, thrown away, or homeless American children who use survival sex to acquire food, shelter, clothing, and other things needed to survive on America's streets. According to the National Runaway Switchboard  1.3 million runaway and homeless youth live on America's streets every day. [5,000 die each year] It would not be surprising to learn that the number of children trafficked in the United States is actually much higher than 300,000.

Children are often targeted by traffickers as they are deemed easier to manipulate than adults. More money can be earned by younger girls and boys exploited in sexual exploitation, especially virgins. Pre-pubescent girls are reported to be injected with hormones to bring on puberty. Younger girls are expected to have a greater earning potential, and as such are in greater demand.

Physical and Mental Consequences of Trafficking for victims; 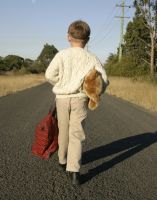 Demand for cheap labor and for prostituted women, girls, and boys is the primary "pull" factor. Common push and pull factors exploited by traffickers include:

Sex buyers are far more complicit in the victimization of sex trafficking victims. Sex tourism and child pornography have become worldwide industries, facilitated by technologies such as the Internet, which vastly expand the choices available to pedophiles and permit instant and nearly undetectable transactions.

Click to read the Needs of Rescued Trafficking Victims

Many youth, especially U.S. citizen children trafficked within the U.S., run away from problems at home and may be exploited as a result of emotional vulnerability, homelessness and the need to survive. Youth who run away from home and engage in "survival sex" often find themselves vulnerable to pimps and traffickers involved in prostitution networks. Approximately 55% of street girls, and a good percentage of boys, engage in formal prostitution and some think it is much higher than that. This means that a child client who has been homeless or living on the street for any amount of time has a great likelihood of having been sexually exploited or trafficked.

The sexual exploitation of children is not limited to particular racial, ethnic or socioeconomic groups, although children from poor families appear to be at somewhat higher risk of commercial sexual exploitation. In fact, most of the street children encountered in the study were Caucasian youths who had run away from middle-class families. One clear theme is the is proportionate number of street youth who have histories of recurrent physical or sexual abuse at home and took to the streets in a desperate effort to bring their abuse to an end.

According to these researchers, child sexual exploitation in the United States affects as many boys as girls, but boys are less well-served by social service and law enforcement systems because of the widespread belief that boys are better able than girls to fend for themselves. Without intervention, research has shown many boys shift from being victims of sexual abuse to victimizing other boys and girls as pimps and traffickers.

People are recruited in several different ways such as through fake employment agencies, acquaintances, newspaper ads, front businesses, word of mouth or abduction. Traffickers may be neighbors, friends, returnees, agricultural operators, owners of small businesses, diplomats and even families. Increasingly, however, the traffickers are organized crime syndicates, often in collaboration with corrupt law enforcement entities, government officials or employers, who may use several intermediaries from the first point of contact to the final destination of the victim. If the victim is transported, they use both legal and illegal means of transport and various techniques to keep their victim enslaved.

They may keep them under lock and key or in isolation from the public and from their family members or support networks, confiscate their passports or identification documents, use the threat of violence against the enslaved person or their families, threaten them with shame, fear of imprisonment or deportation, and control their money.

The psychological effects of torture are helplessness, shame and humiliation, shock, denial and disbelief, disorientation and confusion, and anxiety disorders including post traumatic stress disorder, phobias, panic attacks and depression. Victims may experience Traumatic Bonding (Stockholm Syndrome) – a form of coercive control in which the perpetrator instills in the victim fear as well as gratitude for being allowed to live or for any other perceived favors, however small.

Ark of Hope for Children's sources for U.S. and international trafficking statistics;