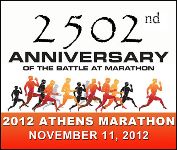 Giorgos Kassakos, @Greek_QB an awesome friend of Ark of Hope for Children, @AbusedKids, is running in the 2012 Athens Classic Marathon on November 11, 2012. He will carry Ark of Hope for Children's logo on his shirt in support of abused children worldwide. Of the run Giorgos said running and finishing the race will not be enough for him, and then added;

"I wanted to help other people, raise awareness and provide financial support for people that need it more than anyone. Is there anyone that needs our help more than the abused children of this world? So, I decided to contact the Ark of Hope for Children."

Will you join me in "sponsoring" Giorgios in this run by supporting child abuse victims helped by Ark of Hope for Children? Their personal struggle towards freedom from the emotional torment in their minds is truly a lifelong marathon. They teach me endurance by their willingness to trust us as we encourage them to hang on and keep fighting.

Your support will mean so much to them and to us. Ark of Hope for Children has just taken a bold step and opened our very own nonprofit international live chat support site directly for child abuse victims male and female, young and old. The new site Removing Chains with over a dozen live chat support rooms has just opened and is far from complete. Your funds will help us reach thousands more worldwide.

Please partner with me by donating, sharing or even starting a fund raising Team of your own during Giorgios run! Giorgos full commentary on his November 11, 2012 running of the Athens Classic Marathon is below.