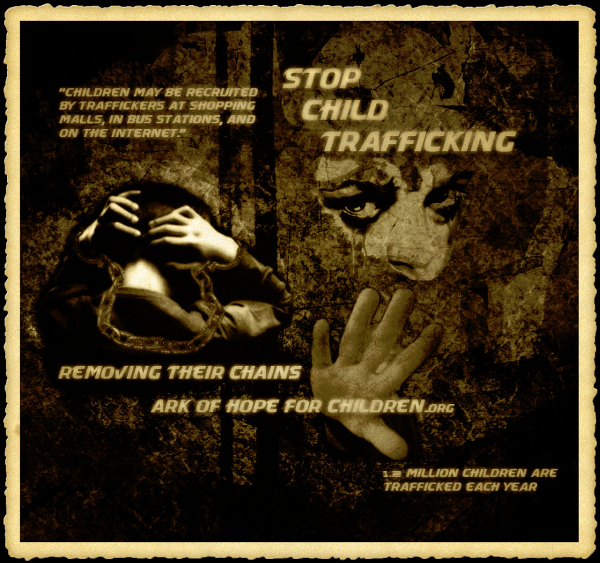 Ark of Hope for Children discovered shocking figures have been released that show that child trafficking offenders rake in billions of dollars with the purchase and sale of children, while authorities remain in the dark. The figures were released by the UN Children's Fund and Germany's Federal Criminal Agency.

It's always the same story: A lack of care and education lead to poverty and despair - hopeless situations that human traffickers worldwide take advantage of.

The force their victims into prostitution, force them to work and misuse them for illegal trade in organs. Experts estimate the number of victims to be in the millions. The UN Office on Drugs and Crime (UNODC) said in its annual report that based on official data supplied by 132 countries, children and young people up to the age of 18 make up a large percentage of all human trafficking cases: 27 percent between 2007 and 2010. Of these, two-thirds were girls.

According to the study, the majority of child victims were found in Africa, the Middle East, South Asia and the Pacific. More than half were found to be forced into prostitution, about 36 percent into forced labor, while others toiled as beggars or maids.

The situation has been getting worse in countries that were part of the former Communist Bloc. Children who grow up in broken families are particularly vulnerable, Anne Lütkes of Unicef's German branch said Thursday (10.01.2013) at a news conference in Berlin. Many children in Romania are not even registered, she added. "These children can simply disappear without anyone ever knowing they existed," Lütkes said.
Luetkes and Ziercke, presented dismal figures.

In Romania alone, about 84,000 children live with just one parent or other relatives, Lütkes said. Such families, in which parents have often gone abroad in search of work, present the greatest risk for children, Lütkes pointed out. She added the situation in Romania is comparable with that in other Eastern European nations, including Moldova and Bulgaria. The bleak situation in these countries provides an ideal opportunity for human traffickers.

According to UNODC, the number of criminal proceedings, indictments and sentences in connection with human trafficking worldwide has increased over the past years.

Despite this, only few offenders are ever held responsible, the UN office said in its most recent report. In 2010, there were 1,250 convictions for human trafficking in the entire EU. The BKA listed 482 proceedings in Germany in 2011 for "human trafficking with the aim of sexual exploitation." Most of the suspects were German, although Bulgarians, Romanians and Turks were also implicated. Two out of three underage victims are girls

Investigating cases of human trafficking is personnel- and time-intensive, Zierke said. Proceedings can take two years or more, usually involving traumatized victims. The biggest problem is victims' frequent unwillingness to cooperate with the authorities. An unfortunate situation, the head of the BKA said, since victims' statements are crucial for an investigation. Without testimony, an investigation usually isn't even initiated, he said.

And more often than not, that means smooth sailing for human traffickers, Unicef expert Anne Lütkes said. The situation is especially difficult for refugees, she added, explaining that they often keep silent for fear of being deported. Authorities who deal with refugees often cannot discern the difference, she said: "A refugee child could be a trafficked child."